7 ways Walmart is innovating with technology

From new mobile apps for both customers and employees to robots on the store floor, Walmart is using tech to best the competition.

Walmart has stepped up its innovation game in the past two years since the acquisition of Jet.com and the addition of its founder Marc Lore to the executive team. In short order, the company made a number of e-commerce buys and has been working on new technology to help fuel growth.

Some of that new technology was on display last week at the company's annual shareholder meeting in Arkansas, a series of events designed to reward and energize associates complete with two days during which media was treated to business segment updates and store tours. There was even a rare backroom peak into how Walmart is using technology to drive efficiency and improve employee conditions, thus reducing turnover and operational costs.

Walmart made waves — and not in the good way — when it launched and then quickly abandoned a mobile order and pay initiative called Scan & Go. Customers found the program less than useful and somewhat intrusive, but the retailer has already iterated another version soon to be rolled out to stores.

New features include integrated store maps, now in 165 locations and rolling out soon to more stores, according to Mark Matthews, vice president of digital acceleration. And while the thousands of Walmart stores in the U.S. may appear identical, particularly supercenters, many are unique in terms of layout and services offered. Mobile updates will now show shoppers these details, even allowing them to access available in-store services, make appointments, see if a movie is available at their local Red Box or rent a carpet cleaner for pickup.

The new store map feature launched quietly earlier this year and already close to half of mobile page views initiated from shoppers in stores where it's active are going to the maps feature, Matthews told media during the tour.

Roughly 80% of shoppers make paper lists before heading to the store, according to Matthews, and attempts to translate this to digital tools haven't been widely embraced by shoppers. A new list feature in Walmart's app lets users enter items in natural language, like "popcorn" or "coffee maker." The app pushes a limited number of brands or item selections and lets the user choose a specific product. And because the lists are integrated into new store maps, each item can be precisely located down to a four-foot wide section on the shelf.

Walmart is integrating shopper purchase data into the app so that both items bought online and in stores can be accessed by the customer, who can scan a paper receipt to utilize the feature for non-digital transactions. Shoppers will be able to initiate a return within the app, selecting an item from this digital history and creating a barcode on the mobile device. Once at the store, they can go to a designated area at the customer service counter, present the code to be scanned and simply drop off the return. The customer then gets a message that the return was received.

Restocking shelves, finding and returning misplaced products, and tracking inventory levels are among the most time-consuming tasks at any retail store. Walmart is now using robots to facilitate the process.

A roving robot from Bossa Nova Robotics traverses the store collecting information, making sure pricing is up to date and shelf tags are accurate, identifying out of stocks and keeping track of overstock items that are now kept on the top shelf to reduce backroom trips for inventory replenishment. 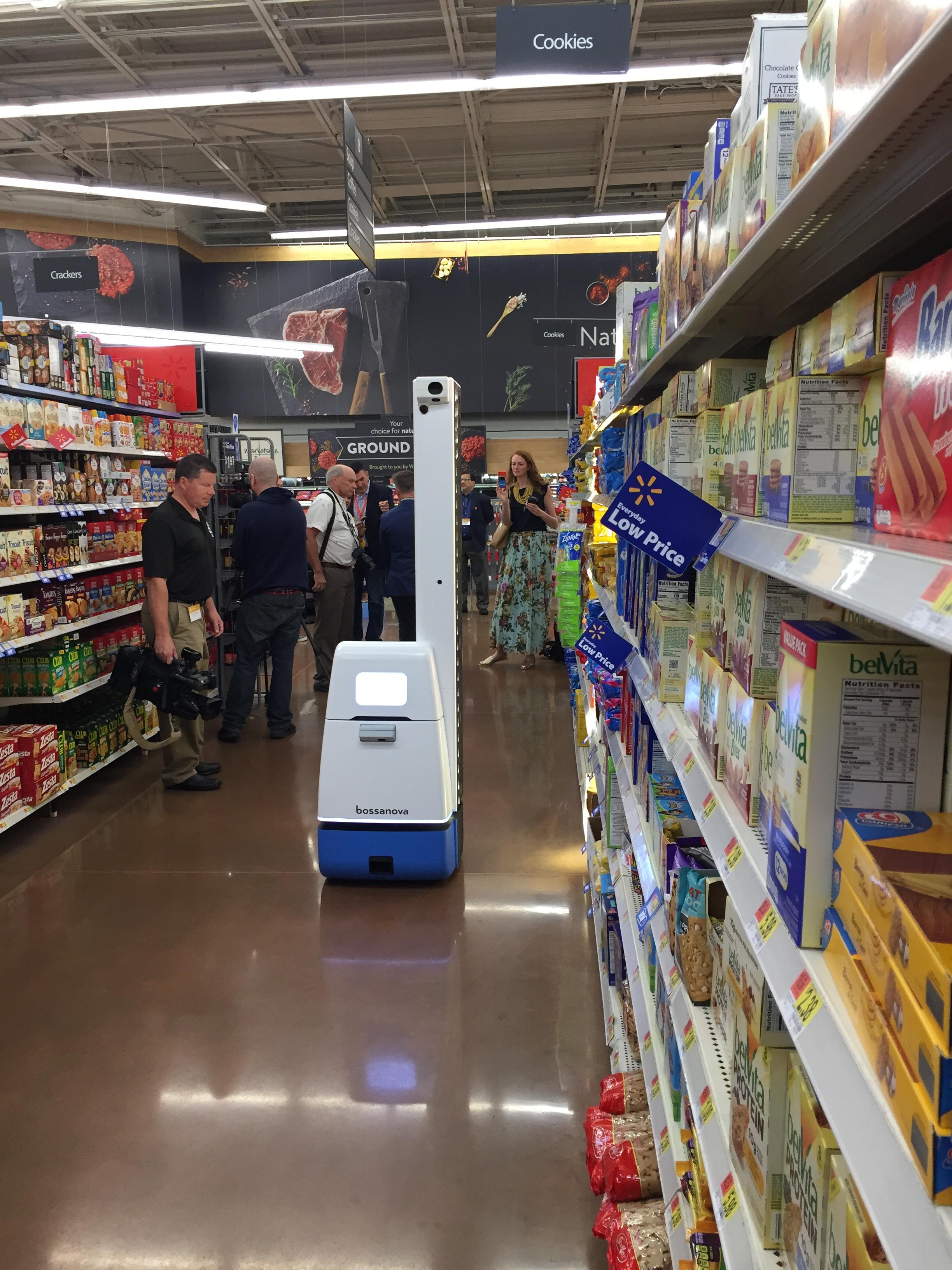 This is currently in 50 stores and both the robot and Walmart are still learning how to best utilize the technology. "There's lots to learn before rolling it out to 4,500 stores," Crecelius said, including how to support and provide maintenance on it. "We're learning how to use it and create value with it."

Walmart is laser-focused this year on improving the work experience for associates, and made a number of announcements to that effect during the week including a new dress code and a program to pay for college. The retail giant also rolled out new technology tools to assist associates in the store.

New mobile devices are paired with information from the Bossa Nova robot, which transmits a to-do list to employees based on its finding. The robot takes photos, points out issues and precisely identifies the location and item to move or restock.

There's also a new scheduling app that gives employees remote access to their schedule complete with the ability to swap shifts via a mobile device. The app is now live for roughly half of Walmart associates and will be available to all by the holiday season, according to Mark Ibbotson, executive vice president of central operations for Walmart U.S.

Walmart is using virtual reality to improve training programs and there's even a video game that uses avatars in simulated experiences to accomplish work-related tasks and earn rewards.

In the back room, Walmart has automated the process of unloading trucks and sorting inventory — a task so disliked the company could hardly keep associates in the role. The aptly named "Fast Unloader" can move a full trailer of merchandise along a conveyer belt, sort the items and get them to carts for shelf replenishment in a fraction of the time it took by hand.

The system is now in 30 stores and Walmart is "adding 10 a week," said Crecelius. "We're putting them in as fast as we can." Walmart executives were adamant that automation has not replaced workers, but rather associates in those jobs have been shifted to others, mostly on the store floor to interact with customers.

Then there's Jetblack, Walmart's new concierge shopping service and the first business to come out of its Store No.8 incubator. The program uses AI backed by humans to deliver a curated assortment of product recommendations to its members from Walmart, Jet and a selection of other retail partners including brands like Pottery Barn and the Gap.

Jetblack is focused on high-end consumers in New York City, and only those who live in doorman buildings, at least for now. And while it's a world away from the typical Walmart supercenter now playing host to roving robots and automated unloaders, the underlying unifier is the use of proprietary technology intended to differentiate the company and keep a step or two ahead of — or at the very least in lock step with — its biggest competitor.